The History of Founder Jerry Peterson

The Conception of SCARS began in real combat 1968-69 Vietnam. 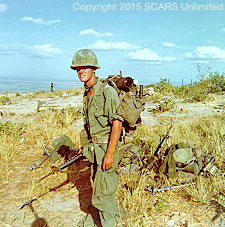 Jerry L. Peterson, then a soldier serving two combat tours in the elite Army Reaction Force of the 173rd Airborne Charlie Company, found that the close combat training Jerry Peterson had received was nearly useless against the grim realities of 20th century warfare.

Walking "point" the majority of both tours (where the life expectancy of walkin point was less than one week), gave Peterson unsurpassed knowlege of how humans functioned in war and under stress.

Jerry Peterson and the soldiers in his unit were forced to learn close combat by trial and error, in a place where error meant death. At times the 173rd were attached to the Korean ROC, Jerry saw first hand the hesitation in combat brought on by their advanced and structured martial arts training.

Having over 200 hot landing zone drops (meaning dropped into the middle of ongoing battle) Jerry and his company were usually out numbered.  In one battle, Peterson was out numbered 568 to his Company strength of 68.  24 hours later Jerry Peterson and 18 others walked out alive killing all 568 enemy troops.  This battle is documented and after all the ammo ran out the men were forced to use any means necessary to survive.

The Psychological Development of the Fearless Mind-Set Process.

Jerry Peterson was convinced there had to be a better way to train for and successfully execute close combat.

He formulated concepts and theories that applied to human movement and psychological survival under do-or-die conditions. His early analytical and physical techniques worked, giving him the tools to survive numerous combat engagements. Jerry wanted more, he wanted to know why humans would be fearless one day and then frozen in fear the next resulting in death.

Jerry Peterson would discover and verify after 20 years of personal research that he had created a process to eliminate fear.

This meant the total destruction of fear in the human brain.

Not controlling fear with over training or conquering fear with shear will power, he simply removed it from the psyche of the human brain. Accomplishing the first goal of human control, a fearless mind-set, he discovered the mind controlled other human processes that inevitably lead to life or death in a high-risk action.

Not only was this process of fear elimination successful in testing under stress in combat actions, it was later proven with scientific empirical data.