In combat, Peterson discovered there was certain knowledge that could be accessed (subconsciously) under combat situations and things that simply could not.  In simpler terms realizing this not only in himself but seeing his peers being extremely “fearless” in combat one day and then the following day, hesitate for a second leading to death. 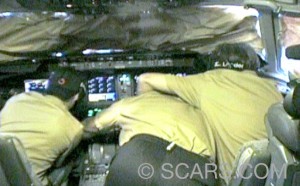 After 20 plus years of much study of advanced mental processing Peterson found that training one’s ability to become creative and think under stress allows you to become 100 steps ahead of someone who is merely just “reacting” to the situation. Or in other words the “you” now not knowing SCARS is 50% slower at making the correct decisions in a life and death situation than the “you” knowing SCARS would be.

Keep in mind society’s concept of “reacting” is not what we are referring to. Reacting is considered to us a term explaining a bioelectrical involuntary process in the brain that forces indecision, hesitation and most of all illogical movements that lead to death. Reacting is what most self-defense training is based off of because the people creating these systems have never been in combat, they do not understand that what they are teaching will never work in true environments where you can’t “get ready” or have time to see what’s going on.

Memorization equals reaction, which equals failure in variable situations. A variable situation is anything from being in the middle of a car accident, a fight, a street mugging, general combat, and to the most extreme, a counter ambush reaction.

This is why SCARS never teaches you to memorize a specific set of movements.  This is the most basic concept in SCARS.  The starting point is creating memory pegs in the subconscious mind that are actual physical targets that can instantly incapacitate your aggressor. Don’t get confused, this is not the only process.

This discovery of training methodology is based on the science of how you make your brain access information under direct threat. As you read this it makes sense, however, it is not that simple to develop such training. It goes far beyond just learning to hit targets. Targeting is merely a tool that can help the process.

Another huge aspect is the certain minimal amount of time that one must be put under this special subconscious development training. When developing the pre-deployment program for front line combat for the US NAVY SEALs, much research was utilized on how humans retain knowledge. Meaning that they will not act improperly under life and death action after a certain amount of gestalt submersion.

This is why we require a minimum of 3-5 days 30-50 hours of our specialized process. Any less time and trainees are not reset properly to assimilate variable situations. This is not an opinion, this is proven research that has been conducted since the early 1900’s.  Note: Don't be mislead by others that claim that you can learn in shorter periods of time, its hype, science says otherwise.

This minimal time structure is in direct correlation to the elimination of defensive thinking processes and the reframing of the superior SCARS Mindset ™.  Keep in mind that last sentence has nothing to do with the sports terminology or literal meaning taken from sports of “defensive” and “offensive”. We are referring to the bioelectrical thought processes in the brain that involuntarily create apprehension and hesitation.

Keep this in mind and do not be misled when you watch a specific SCARS lesson, the goal is to master the principle behind the lesson not the rehearsal of movement.  You must always understand the principles "the why" and then incorporate it into you variable training sessions. False: SCARS is based on memorization of “techniques”.