The Development of SCARS at the US Military's NAVY SEAL Command. 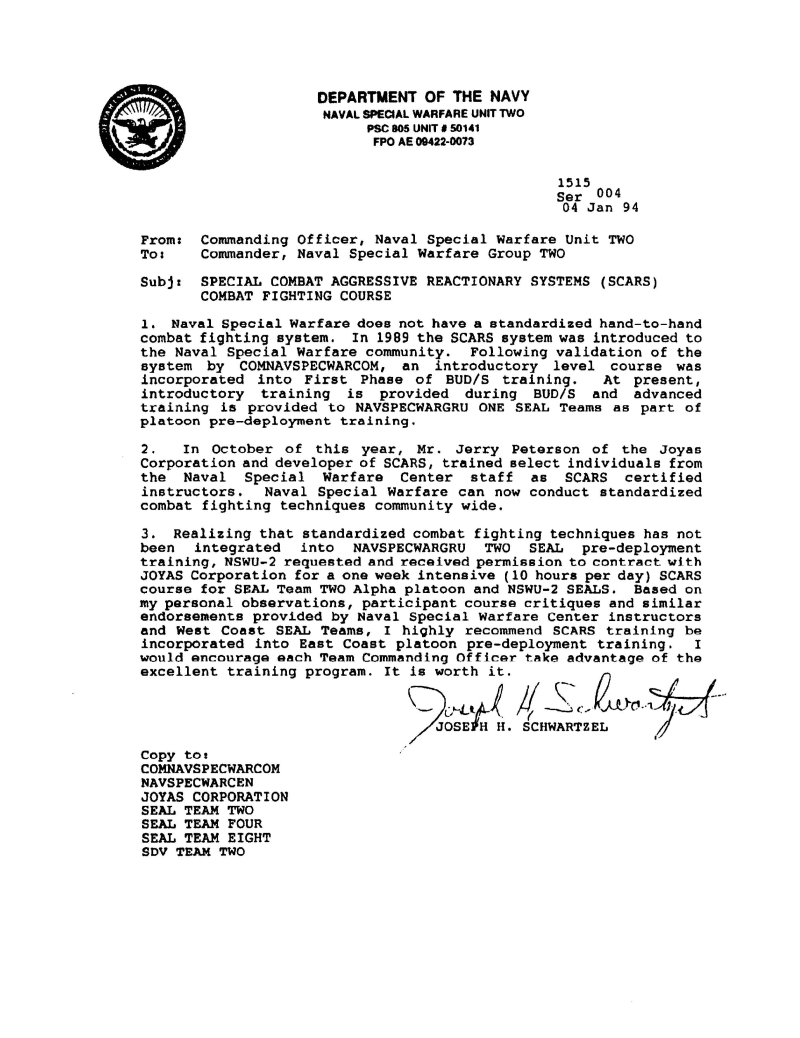 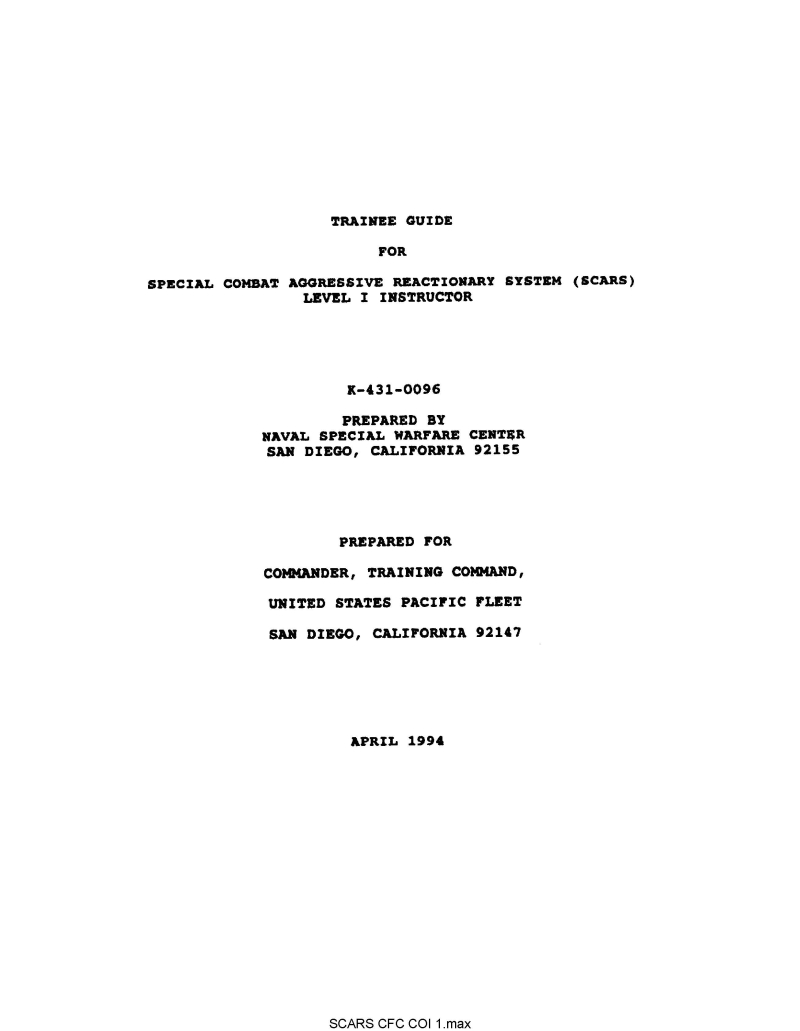 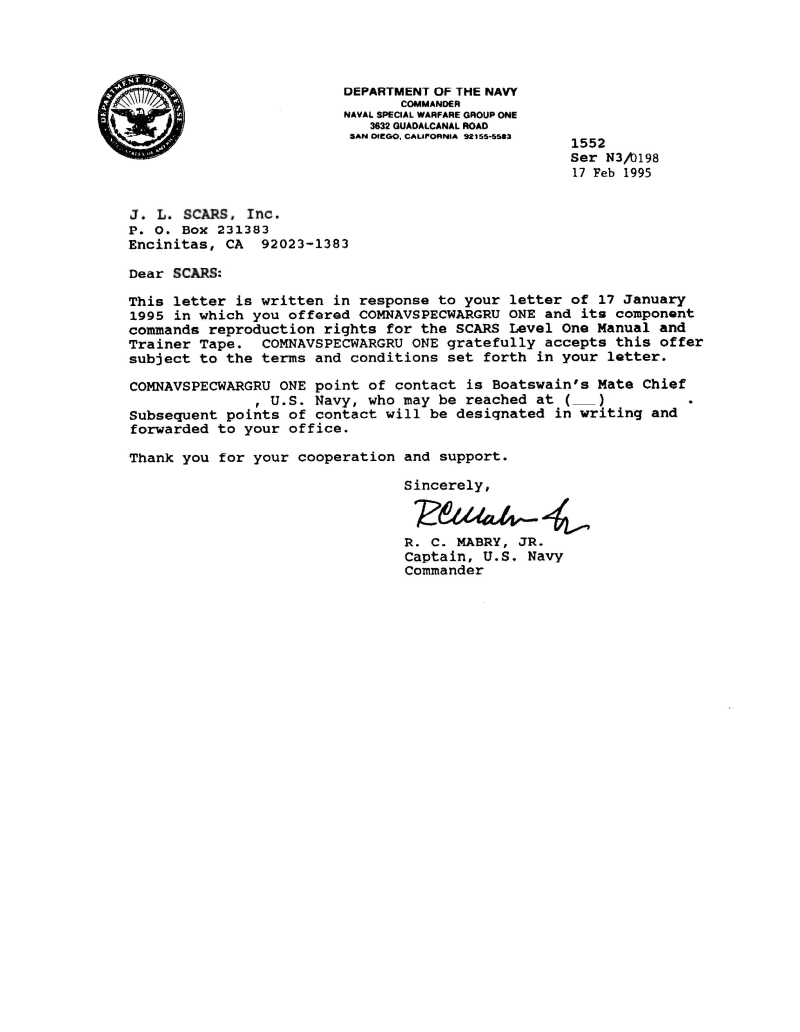 SCARS was an "In House" training program.

In 1988 Jerry Peterson’s credibility received the attention of the United States Navy Special Warfare Command at Coronado, CA (US Navy SEAL headquarters). The Special Warfare Department of the Navy began contracting Jerry Peterson and his corporation to develop a program, later titled "the SCARS project," that would universally apply both physiological and physical fields of CQB (Close Quarters Battle).

Between November 1988 and February 1989 Jerry Peterson and the US Navy began testing the SCARS project using combat veterans within the SEAL ranks. The Navy was restricted to combat veterans that had either real world hand-to-hand combat and/or advanced training in any form of fighting art (martial arts).

SCARS is 100% effective in all CQB actions.

After three months of physical testing the Navy agreed that SCARS had proven, beyond a shadow of a doubt, not to stem from a style of martial arts. This system could possibly be the standard for hand-to-weapons combat for the US Navy Special Warfare Command Department (SEALS).

In March 1989 the Navy and Jerry Peterson agreed that further development and testing was warranted. The Navy agreed not to divulge any information on the SCARS project to the public. Jerry Peterson also agreed not to release any mission specific information about the training and SCARS. Should SCARS be given official sanction and approval by NETC, (Command for Navy Educational Training) limited statements could then be released.

Being classified information allowed SCARS to be tested in every condition of  international  combat and/or police action that arose where the  military may be used. Around April of 1989 the Department of the Navy officially contracted Mr. Peterson and his corporation to begin further development of the SCARS program.

The SCARS project was tasked with four main objectives:

From 1989 to 1994 Jerry Peterson personally headed up the development and training of the SCARS programs.

After 5-1/2 years of development and testing of SCARS by the Special Warfare Command, the US NAVY SEALs received official approval from the Navy Department of Education CNET. This was the first time in the history of the US Navy that a hand-to-weapons system had officially been approved as a standard of combat.

To date, Jerry Peterson is the only individual ever to have established a proven set of principles based in modern sciences. After official approval of all of the SCARS programs Mr. Peterson licensed the Navy to conduct the SCARS Force Multiplier Train the Trainer Program. This was a Level-2 300-hour SCARS "Train the Trainer" course, it was developed and instructed by Jerry Peterson. This final course was the procurement of Jerry Peterson's work for USNAVSPECWARCOM. Shortly after the SCARS/CFC (Combat Fighting Course) was officially implemented the US Navy West-coast command requested a SCARS military demonstration.

The SCARS program was presented to  The United States Secretary Of State, the  Commanding Four Star General of the US Army, the  Secretary of the Navy and other political personnel whom all gave their overwhelming approval of the program.

This program taught by Level 2 SCARS Instructors was a "closed" course, meaning there was only a certain allotment of trainees that could request a slot to go through the program. The SCARS train the trainer program produced over 300 SCARS subject matter experts in the field of non-lethal to lethal hand-to-weapons action. Thousands of US military personnel have gone through the SCARS programs.

During this time, 1 in 10 Navy SEALs was a subject matter expert in SCARS and qualified to train other SEALs. After the Force Multiplier program was completed the Instructor program was finalized. Today SCARS principles and the Offensive Mindset™ are still taught and utilized within the Special Forces Community.

No military SCARS instructor is allowed to teach the SCARS programs outside of the military. To this date Mr. Peterson has restricted all licenses to certify subject matter experts in the SCARS system of sciences solely to the US Special Operation Community.

"I attended the 300-hour SCARS course in 1991 as a Seal Instructor. Having many years in other Martial Arts before SCARS, I can say it is the most no nonsense fighting system I have ever learned. I have applied SCARS to everyday life, my job requires me to use the SCARS offensive mindset, if you don’t you will not make it. You will be DEAD! I challenge anyone to apply their fighting system in a combat role. In my opinion, SCARS is not just the greatest fighting system around, it can also be applied to your everyday life." C. F. Harmon BUD/S Class 148 AF&AM 1174
“In today’s high tech military, the most important weapon system in the Naval Special Warfare inventory is the Navy SEAL himself. The SCARS training has given new teeth to the term ‘The Naked Warrior’.” D.L., LCDR, USN
“At a recent meeting held with the STO, BTO and the phases. A consensus was reached concerning combat fighting, specifically the SCARS System, and it’s relevance to our mission. All concerned agreed that it is a fundamental skill and should be part of the BUD/S course… The West Coast Teams are also incorporating SCARS principles into their CQB training for SEAL platoons… Since SCARS is not a form of “martial arts” four weeks is a realistic time frame to train some one to be an instructor.” L. Hicks, BMC, USN
“In my 29 years of NSW I have had numerous hand to hand courses, this is the only one I feel confident and positive the fighting system will work in combat and would be extremely beneficial to the NSW operator.” Roger H., CWO3, USN
“… I consider a large part of the future of Naval Special Warfare greatly depends on the SCARS/CFC System. Special Operations personnel are anytime, anyplace soldiers with a very difficult mission…. We cannot afford indecision or lack of confidence at a critical time. However, the SCARS/CFC System greatly enhances the skills of a soldier, mentally and physically, thereby greatly increasing mission success.” F. B. , Op Chief SEAL Team THREE.
“In conclusion, SCARS is a very good scientific fighting system. Many different arts and sports have by the Teams in the past, but they have all been discarded. I feel SCARS will become widely accepted by the special operations community once it is experienced firsthand.” Michael D., USN
“Based on my personal observations, participant course critiques and similar endorsements provided by Naval Special Warfare Center instructors and West Coast SEAL Teams, I highly recommend SCARS training be incorporated into EAST Coast pre-deployment training. I would encourage each Team Commanding Officer to take advantage of the excellent training course. It is worth it.” Commanding Officer NSW Unit TWO