Learn why SCARS is not a SCAM.

General quote made from civilian bloggers: "SCARS fighting is nothing special it’s just a con, every system of fighting is based on geometry and physics."

Before Jerry Peterson and the SCARS Institute of Combat Science there was never a reason to put the word combat, science, and institute in your systems name or talk about human reaction or mental fear! Now it’s what every system tries to incorporate into their slogan or name.

Because of Jerry Peterson the martial arts world had to change! Like it or lump it everyone had to stay with the curve by putting the word “science” in front of your system like “Sciences of White Crane Kung Fu”, “Street Fighting Science” and putting the word “combat” in front of your system like “Combat Karate” “Combat Muy Ti” or “Combat Jujitsu” or “Combat Fitness”.

In fact it’s quite funny because the few who so hate SCARS fighting actually have some sort of bit or piece of SCARS fighting in their system today! You can’t just upgrade your system to “combat” when you were once teaching the sport of “fighting”. Yes every system is based on principles of human movement if you look at it in laymen terms. However, this is not what SCARS is referring to.

e believe is combat! When you watch gun disarmament there are absolutes that must occur in order to successfully pull off a disarmament that you can bet your life on. And contrary to popular belief these principles of science go way beyond any movement or rotation.

You will find that most every system tries to mask their lack of knowledge about a weapon disarm with speed or impress you by how fast they can do it in front of you.

A perfect example of not using science but rather fear or aggression during a disarming is grabbing a hand gun by the barrel as most defense systems do. This is a movement based on fear because they are visually and mentally focused on the idea “don’t get shot”! OR they are applying old forms of martial arts that were around before firing weapons at a time when you could turn a staff or club out of a hand! But not today!!! This is wrong!

If you apply science and the scientific method you will find a much safer solution that one would never think of, because you are too disillusioned by fear and aggression. AND THAT’S only the first movement. Think about what else is going wrong. 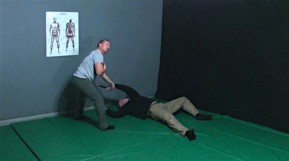 Every single human’s reaction process on a scientific level and every single human movement has been looked at and calculated either correct or incorrect. Meaning it fails under stress. You may be able to pull it off in the dojo, but 40-60% of the time its not going to work out on the street. Due to the fact that it is not scientifically sound! That is the difference between the SCARS fighting method and other systems.

The principles and methods that are taught in the SCARS fighting method have been scientifically proven to work 100% of the time! Sure you can grab the gun or practice speed punching but you are never going to see SCARS fighting teach anything that will not absolutely work out on the street against an expert or professional period.